“As a black man playing this game, I just don’t feel like…you know, the majority of the media is middle-aged white guys, so I don’t think you can accurately construe what I have to say, or portray me as who I am, because you don’t know. You don’t know where I come from, nobody has ever asked those questions. They just see what they see. I never carried a gun; I never hurt anybody, but I am made out to be something I’m not. I’m a nerd. I graduated with a 3.7 (grade average) from high school. I got 1120 on my SAT. I play scrabble on my phone with (Seattle pitcher) Shawn Kelly in the bullpen. This is stuff people don’t know. I’m as non-violent, non-threatening as they come.”

“I want people to say Milton Bradley was a pretty good ballplayer and a pretty good person. Anybody who is going to stand between me getting there, then they need to be eliminated.”

“There’s always race in everything. You see, that’s another thing, white people never want to see race with anything. There’s race involved in baseball. That’s why there is less than 9 percent African-American representation in the game.”

“Basically, for me, I talk to people I like. I don’t particularly like the media, and the media doesn’t like me. So let’s not pretend we’re buddies or you’re trying to do anything for me. If anything you hurt me more than help. So I don’t see any benefit of really talking to the media. That’s just how I feel. That’s how I’ve always felt.”

Button your lip, and don’t let the shield slip
Take a fresh grip on your bullet-proof mask
And if they try to break down your disguise with their questions
And you hide, hide, hide
Behind paranoid eyes

To Milton Bradley, it’s very simple. A self-described loner, he considers every line-drive he hits, every “crack” of his bat, the sound of pure, delectable revenge. Even in the outfield he can hear Tupac Shakur lyrics pulsing through head and heart:
“I was born not to make it but I did
The tribulations of a ghetto kid
Still I rise
Still I rise”

Bradley has risen from a youth in Long Beach, Calif., that helps explain, well, what his problem is. For all the board-game jokes about his name, the way he got it isn’t one. Charlina Rector dated a man named Milton Bradley in the late 1970s but says she broke off their engagement because she claims he was hooked on cocaine. When she gave birth to their son in April 1978, she was still unconscious when Bradley filled out the birth certificate without her permission. He wanted a Junior, and made damn sure he got one.
Rector, who was already raising four kids from a previous marriage, says she protected Milton Jr. as best she could from what she describes as his drug-addicted, abusive father.
Rector says Milton Sr. was a Vietnam veteran with a purple heart, who slept wherever he could and spent several years homeless. When he got off drugs, Rector says, she allowed him to spend some time with Milton Jr. Rector had already taught the boy to bat right-handed. When she was out working, Milton Sr. forced him to swing left-handed, just like him. Hence the switch-hitting.

When Milton Jr. played Little League, his father would occasionally show up to watch, causing him to become distracted and withdrawn. Rector ultimately told his father, “Stand where he can’t see you.” Milton Sr. would hide behind a tree, but the kid knew better.
Milton Jr. still occasionally speaks with his dad, who he says is unemployed and “not doing much of anything.” The son never calls the father. He talks with him only out of respect for the blood he had no choice but to inherit. “All I got from him was the same name,” says Bradley, who never changed his name because the memories only drive him harder. It was always him and his headstrong mom, a cashier at local Von’s and Safeway supermarkets, against the world.

In August 2011, Los Angeles police said Bradley brandished a baseball bat, raising it above his head and menacing his wife with it.

Bradley allegedly threatened his wife with a knife in March 2012, and told her she would be dead “before you divorce me,” according to authorities.

Bradley also allegedly threw a cellphone at a television screen during an argument in August 2012. The argument escalated into a physical altercation, during which Bradley allegedly kicked his wife in the ribs while she was on the floor.

In November 2012, authorities said Bradley pushed his wife against a kitchen wall and choked her with both hands after she asked that he stop smoking marijuana in front of their children, prosecutors said.

A judge on July, 4th, 2013 sentenced Bradley to nearly three years in county jail for continuous physical attacks and threats against his estranged wife. He was found guilty by a jury last month on nine counts: four of spousal battery, two of criminal threats, one of assault with a deadly weapon, one of vandalism and one of brandishing a deadly weapon.

In another crazy twist, there is a German D.J. out of Berlin named Milton Bradley with a song called, “psychological drama.” Perhaps THIS was the soundtrack going through the baseball players head, causing him to wear earplugs in Seattle. Food for thought. 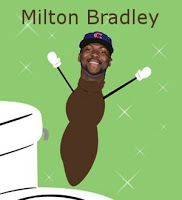